NABIL KHEMIR GROUP
Tunisian born lute/guitar virtuoso Nabil Khemir teams up with Dutch Progjazz artists Stormvogel (piano, synthesizers), Onno Witte (drums) and David de Marez Oyens (bass), The quartet is working on a new album in 2017 (with works of Nabil, and one song by Stormvogel), striving for a dynamic exchange between Punian jazz of Tunesia with European Impro and World Fusion. Stormvogel, Witte and De Marez Oyens are contributing to Dutch Prog Jazz as instrumentalists, composers, band leaders, concert & festival organizers, writers, lectores and educators at leading academies in The Netherlands and abroad, often in related projects and groups.

Nabil Khemir is a Tunisian born lute/guitarist, who has spent a lifetime crafting his artistic skills and musical vision. Growing up in the metropole of Tunis, Nabil was caught by the enchanting sounds of North African and Egyptian music and its rich cultural heritage.Nabil adapted the majestic lute (the traditional ud), at a young age, inspired by Ferid El Atrach and learning from the famous player Ali Sriti. He appeared in a variety of television shows in Tunesia as a lute playing singer at the age of 12. He was also influenced by western jazz- and fusion masters like John Coltrane, John McLaughlin, Joe Zawinul, George Benson and Pat Metheny. In 2004, Nabil created the double neck lute/guitar instrument which he named ‘RayJam’. This unique instrument allows him to explore and share his musical playfulness by having an electric lute and electric guitar within grasp at a moments notice. Since, Nabil has performed at the international festivals of North and South Africa, Europa and Asia, with his own group as well as a guest player at various events offering a program that ranges from jazz to funk, as well as oriental music and world fusion. He played with Joachim Kühn, Chander Sardjoe, Melody Gardot and many others. In 2007 Nabil received the honor award for his composition ‘Parfum d’orient et d’occident’ in the USA and in 2008 the medaille of culture from Tunisia for his cultural contribution to his country.

Since 2015 Nabil is performing with his new group of Dutch Progjazz-artists in France,
For more information, bookings and concert dates, please visit: www.nabilkhemir.com

Onno Witte is an internationally acclaimed drummer and percussionist, working with the finest artists in Dutch and international jazz, fusion, latin and rock, like Anton Goudsmit, Randal Corsen, Jasper Blom, Volker Winck, Rob van den Broeck, Jeroen Pek and many others. Son of progrock keyboardist Frank Witte and influenced by master drummers of Jazz, Strawinsky, Zappa and Magma, Onno combines adventurous drumming with odd meter and out of the box mentality. He released several albums in the realm of progjazz and jazzrock, besides with his own group WILDCARD, also with PitchWhiteStorm, Pitch Plot, Alter Ego Jazzbarock Consort, Wieke Garcia and Bohemian Groove. 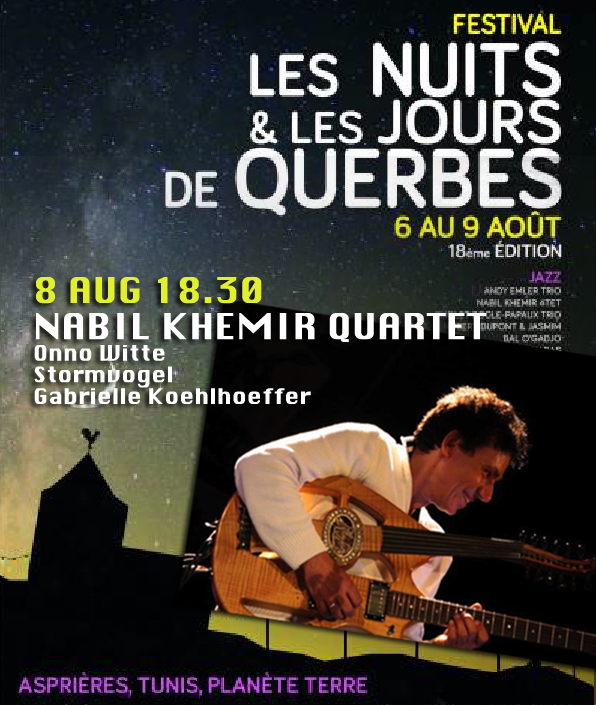